Two things of interest show up when looking at the latest United States Mint sales stats. First the 2014-W Proof American Silver Eagle lost 1,581. And second, the 2015-W American Proof Silver Eagle beat the 2015 Silver Proof Set for the first time since the set launched three weeks ago. The increases were 8,594 compared to 6,936. 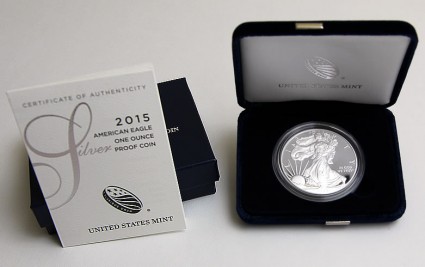 Photo of a 2015 Proof American Eagle Silver and its packaging

In other stats, bullion American Silver Eagles are performing strong since their sales rationing ended on June 1. The bullion coins jumped by 975,000 ounces during the first week of June, the highest since the week after the 2015-dated issue debuted in January. Silver Eagle bullion sales through this week have advanced another 650,000. They stand at just over 1.6 million for the month so far, less than 400,000 away from topping all of last month’s sales.

The table below shows the latest sales stats for collector coins and related silver products from the US Mint. Sunday, June 7, is the as of date.

Bullion American Silver Eagles added 700,000 in the last six days compared to the 1,300,000 increase in the previous week. Wednesday, June 10, is the as of sales date for sales shown below.

Totals for all of the America the Beautiful Five Ounce Silver Bullion Coins released since 2013 are below.